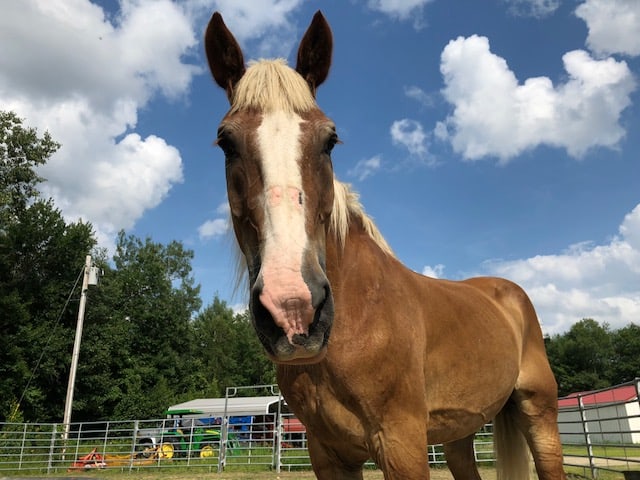 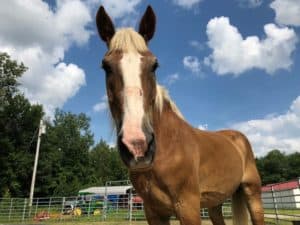 We were asked if we could make room for an aged Belgian gelding because he was out of time. We said yes because he deserved to be safe. We said yes because he needed us. We said yes because we knew our supporters would want us to. And so Samuel got his second chance. He arrived fairly thin, with great manners, very gentle, and with soft eyes. He also arrived with canker in all four hooves. Canker refers to an inflamed, ulcerated sore in the underside of a horse’s hoof. It begins near the frog but may spread to the sole or heel bulbs. The wound has a foul odor, bleeds easily, and has the appearance of proud flesh. Canker can be treated by removing infected tissue and applying various medications, but it is hard to cure and has a tendency to recur. Although more common in drafts, it is still a fairly rare disease with many unknowns. Samuel has been an expensive and exhausting case… but I wouldn’t change a thing. He deserves to have quality veterinary care and has earned the right to be safe. We rarely know any past history on the drafts that join us. Sometimes I wish we knew more, other times I’m happy that we don’t.  Many have not been treated well. Although Samuel has impeccable manners, he also has fear.  When you move too fast by his head or reach too fast to pet him, he gets scared: His body tenses, he trembles, and clearly, he expects the worst. Yet somehow, Samuel still manages to be incredibly brave. Throughout the time that Samuel has been here, he has continued to amaze me with his gentleness and willingness to cooperate.  For each and every bandage change, he marches over to the stocks with a spring in his step and his head held high. He steps right into place without any hesitation, almost without being asked. I think he knows we are helping him. This process has been an incredible learning experience for Samuel, for me, for our veterinarians, and for our followers. We’ve all had to experience patience, disappointment, excitement, fear, and exhaustion. We have learned a lot about this mystifying disease including that what worked on one horse may not work on another horse. Our vet says that diseases having numerous treatment plans often indicate that nothing works consistently. Scary thought, isn’t it? We also learned to make a set of stocks our friend. We learned how to use them as safely as possible. We learned how to keep Samuel comfortable in them. We learned how to work as fast as we could as a team to limit the amount of time he was under sedation. We learned how to make wrapping hooves look easy. Which by the way, it does get easier! All in all, we are moving in the right direction. Samuel is officially sick of us handling his feet (who could blame him), but he still cooperates and we have finally turned the corner and feel that we will successfully beat this disease. He is a very lucky horse. Dr. Rose McWilliams of Hess McWilliams Veterinary Services in Amherst, MA has been an incredible asset to our team. She dove in and learned as much as she could about Canker and how to help Samuel. We were incredibly blessed to have Dr. Stacey Golub from Connecticut Draft Horse Rescue lead the way on this case. Dr. Golub has successfully treated several canker cases and donated her time to Samuel and to all of us here at Draft Gratitude to educate our team and put us on a path of success. We are very grateful to have the support of these two amazing and dedicated veterinarians. Draft Gratitude, established in 2014, is an all-volunteer nonprofit organization dedicated to saving the lives of unwanted draft horses. Once rescued, the draft horses are rehabilitated and will either be available for adoption or stay in sanctuary. Draft Gratitude hosts open barn visiting days on the first Saturday of each month from 10am – 12pm. Learn more about Draft Gratitude, its mission and opportunities to help rescued horses at www.draftgratitude.com or call 603-762-3266.
PrevPreviousDraft Gratitude’s Bill the Percheron
NextUpdate From The Barn – January 2019Next