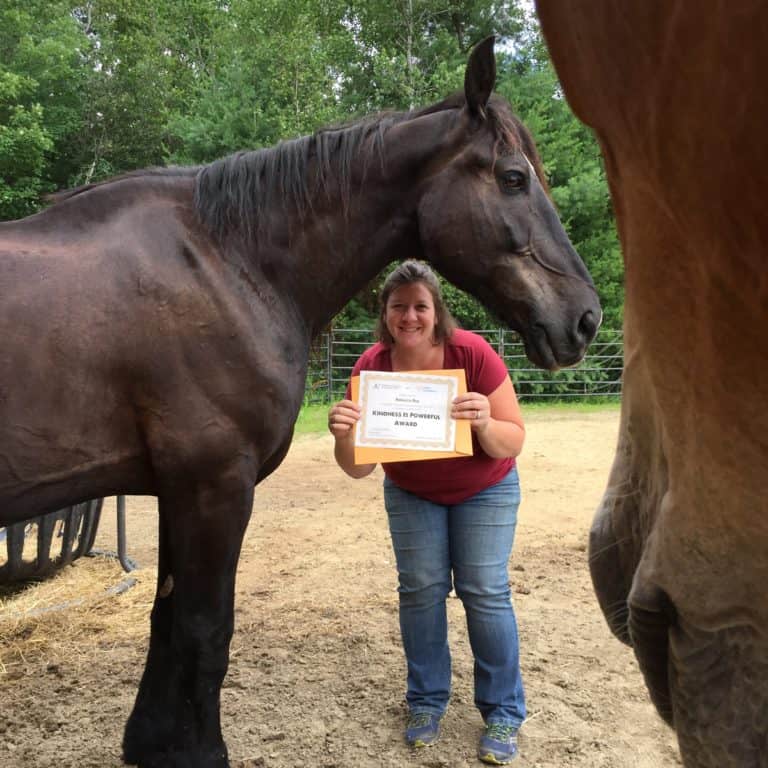 “I grew up on a small farm in Hinsdale, so we had draft horses as kids,” said Rebecca Roy, founder of Draft Gratitude. As an adult, Roy built a special connection with her Belgian mare, Rita, and after the horse’s passing, began thinking about starting a nonprofit to help aging draft horses.

“I’d think about it and work on it a little bit and then get distracted with life,” she explained.

But over time, she filed for nonprofit status, assembled a board and got things underway. “Here we are three years later,” she smiled.

Draft Gratitude is a draft horse rescue based in Winchester that primarily serves retired farming horses.

“When they are not able to keep up with the work of a younger horse, they’re sold at auctions. …They’re often bought by people specifically for slaughter,” Roy described.

While horses are no longer slaughtered in the U.S., they’re frequently shipped to Canada and Mexico, where the practice still exists. To date, Draft Gratitude has saved more than 30 horses from that potential fate.

“We look for the older ones that are in poor condition, who really need the safe landing,” Roy explained. She continued, “These are horses that have worked their lives, and they deserve a better ending than just being cast off.”

Though each case is different, every horse undergoes a minimum 21-day quarantine when they arrive at the rescue. “During that time, they’re kind of getting a chance just to settle in, be fed and have a break,” Roy said. Then, if there’s no sign of infectious disease, they get their hooves trimmed, their teeth floated and all of their vaccinations brought up-to-date. They also go on an individualized feeding program tailored to their needs.

“You kind of go through the gamut of getting them back on track and then try to get them introduced to some of the other ones in the herd,” Roy described. From there, it’s determined whether the horse will remain at the rescue or head to a safe, adoptive home.

For Roy, it’s been amazing to watch what the “snowball effect” the rescue has had. Featured in ELF a couple years ago, Draft Gratitude gained new exposure and several new volunteers. One volunteer, Marcia Passos Duffy, became a member of the board of directors and helped share information about the nonprofit in a magazine she publishes. That was seen by a couple from Hancock who do filmmaking.

A recent surprise for Roy was her receipt of the Kindness is Powerful Award, which she was nominated for by one of Draft Gratitude’s volunteers. Sponsored by The Victoria Stillwell Foundation, an organization dedicated to improving the lives of canines, and the Petco Foundation, the award recognizes people in the rescue world who demonstrate incredible kindness toward animals and who work hard to raise awareness about animal rescue.

As one of five people to receive the award, Roy was also given $2,000 for Draft Gratitude.

“It’s exciting; it’s a big deal,” she said. Whether the funds end up going toward vet or dental bills, feed or hay, they will certainly make a significant difference.

“We have people that donate $12 a month, and the $12 is what we’ve estimated it costs to care for one horse for one day,” she explained. Right now, the nonprofit has 120 monthly donors, but would like to expand that number to 300.

As far as the horses, Draft Gratitude intends to maintain about the same pace, with eight to 12 horses in their care at a time.

Interested visitors can stop by the rescue from 10 a.m. to noon on the first Saturday of each month during the farm’s spare change drive. “It’s just another little fun thing that we have the community get involved with,” Roy said.

To learn more about the organization, visit draftgratitude.com. 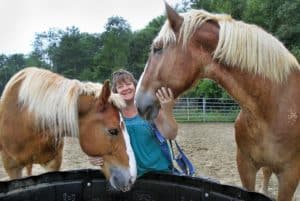 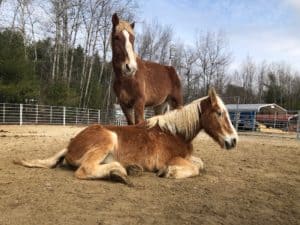