Making strides toward a second chance 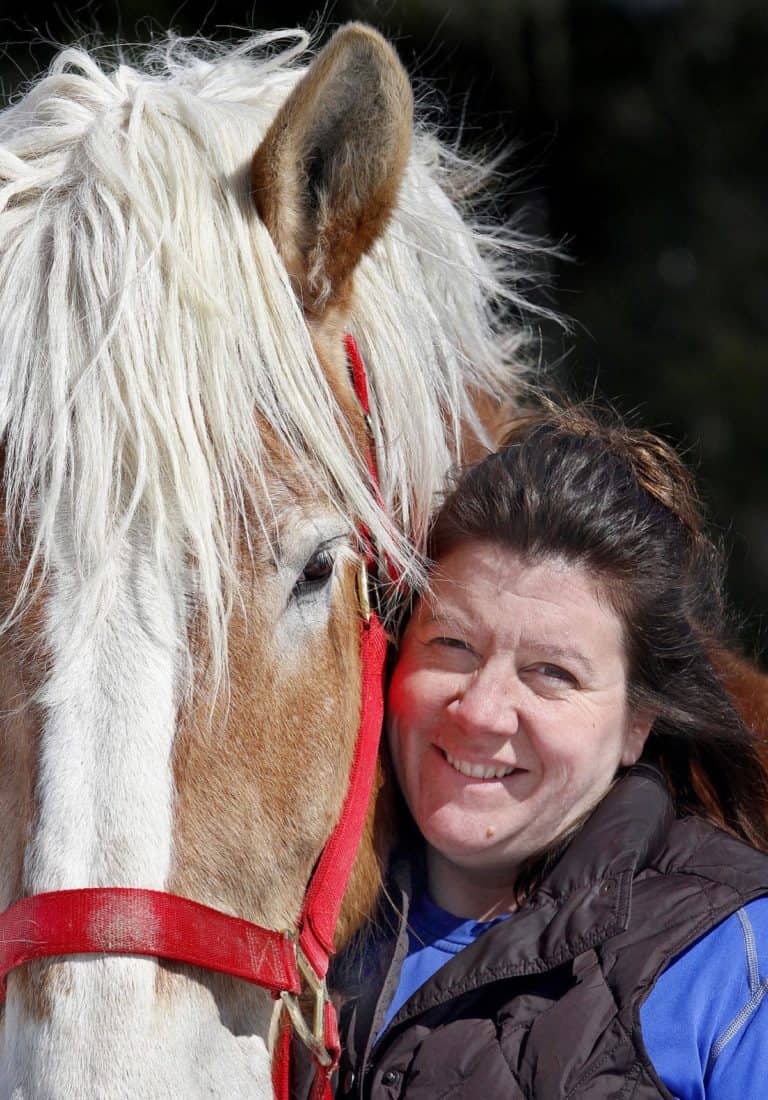 Making strides towards a second chance

On a crisp, sunny March afternoon, Rebecca Roy parks her truck at the end of a roundabout dirt driveway. The task at hand is checking on Pearl, the latest addition to Draft Gratitude, a horse rescue that gives retired draft horses a second home.

Roy makes her way past Big Jake, Jetstar, Anne and Rosie to get to Pearl’s paddock. As she removes the horse’s blanket to take her once-a-week pictures, she remarks at how much better Pearl looks after only two weeks.

The 23-acre property in Winchester owned by Roy and her husband, Jay — complete with a barn and paddocks — houses the rescue and its current tally of nine horses.

Roy, 42, founded Draft Gratitude in 2014 to save draft horses from slaughter and give them a second chance. Draft horses are characterized as large and muscular breeds that have, most of time, worked on farms pulling equipment. Once the horses are too old to keep up with the workload of a younger horse, they’re sold and at risk of being bought by “kill buyers” who send them out of the country for markets that value horse meat for consumption.

“These horses have … earned the right to have a safe retirement, and that’s what we give them,” she says. “Every single horse down there has a differently personality. They aren’t just a number to me or something that’s used up.”

Roy grew up in Hinsdale on a small family farm that had cows, pigs, chickens and draft horses. Caring for animals has always been “just part of life,” she says.

“I think that’s probably where this all kind of started, where the awe started,” she says.

As an adult, draft horses are still close to her heart and in particular an older mare named Rita, who Roy cared for during the last six years of the horse’s life.

“She was a very neat horse; she trusted me, and I trusted her. It’s hard to explain the relationship or the dynamic of it, but she was just a very special horse in my life,” she says.

When Rita’s time came to an end, and she had to be euthanized, something was triggered in Roy’s brain. After that, every so often in the midst of her daily life and work, Roy would think about Rita and caring for the old mare. Then one day, she starting working on a nonprofit application.

“I just simply got rolling, and now here we are, three years later,” she says. Rita “was kind of the picture of the type of horses that we grab now — kind of these aged horses that have lacked proper care and need a soft landing.”

Draft Gratitude focuses specifically on draft horses. There aren’t as many resources for drafts as for other kinds of horses because many rescues simply can’t accommodate their size.

Most of the horses at Draft Gratitude are farming horses in their late teens who can no longer handle the workload, many from New York and Pennsylvania. They’re often 15 years or older, but that doesn’t mean they no longer have a purpose. Older horses tend to be calm and well-trained and are good for companionship, trail riding, homesteading and pleasure driving, which could be pulling a light two or four wheel cart for hobby.

Each horse comes to the rescue in a different way. Sometimes people reach out through social media; other times, Roy travels to high-risk auctions, where some buyers go for the purpose of buying horses to ship to slaughter. While horse slaughter is no longer legal in the U.S., many horses are shipped to Canada or Mexico to be slaughtered for human consumption in Europe and Japan.

“I’m not saying that every single retired horse out there gets slaughtered, because that’s not true. But rest assured that an unwanted horse is at very high risk for being slaughtered, and people should know that when they place their horse,” Roy says.

The process of bringing a horse to Draft Gratitude starts with getting it cleared to enter the state. That requires a health certificate and a negative Coggins test, which proves a horse doesn’t have an infectious disease. Once cleared and brought to the barn, each horse undergoes a quarantine for a minimum of 21 days. In that time, the horse is by itself in one of the rescue’s paddocks while Roy does what she can to learn about its backstory and personality traits, build up a healthy eating regimen and arrange appointments with a vet and farrier. (A farrier is someone who specializes in hoof care.) Once all of this is done, the horse is introduced to one of the bigger paddocks with other rescues.

Draft Gratitude’s capacity is 10 horses, which can sometimes get tight. Space-wise, Roy says, they probably could squeeze in another horse, but choose not to. She wants to provide quality care over quantity, and is happy with Draft Gratitude’s manageable size.

“I have no desire to get in over my head. I’m the care provider for morning and night chores. I do have volunteers that come on Saturday mornings and Wednesday afternoons, but for day-to-day care, it is primarily me,” she says.

One way the rescue stays manageable is by balancing adoptable horses with the “lifers.” For example, Pearl, the newest addition, is 17 years old and sound, which makes her very adoptable. On the other hand, Big Jake, who has cancer on his lip and only one eye, isn’t. Other “lifers” like Big Ben and Jetstar are both pushing 30 and have bonded with each other, so she won’t separate them.

A lot of people inquire about adoption, which is great news because the more that find homes, the more Roy can bring in. Roy works with people to learn what they’re looking for in a horse to ensure a good fit.

When she decided to start a nonprofit organization, Roy knew she’d have the horse side of things covered.

“I’ve taken care of animals my whole life. I have two fantastic vets and I have a fantastic farrier. So between those three resources, when I need help, I’ve got it,” she says.

She’s also worked in equine dentistry since 2009, long before she thought of running a draft horse rescue. After fours weeks of training in Michigan and another two in Idaho, she travels locally on a part-time basis to work, and now takes care of all the rescue horses’ teeth.

What Roy did need help with was starting and running a nonprofit organization. For that, she turned to Sandy Rees.

Based in Tennessee, Rees is the founder and chief encouragement officer of Get Fully Funded, which helps people start and run nonprofits. The two met in June, 2015, when Roy signed up for an animal rescue fundraising class.

“I love animals and volunteer at my local horse rescue, so Becky and I spoke the same language in many ways,” Rees said.

The two connect through phone calls, Skype and webinars, though Rees did have a chance to visit the barn once.

“I’m very thankful to have met her early on because she was just able to help me build correctly,” Roy said.

While there are a number of differences between a nonprofit and a traditional business, there are also similarities in that one needs to have a vision of what he or she wants to create and be able to get others to believe in that vision, too.

“It takes a lot of time, energy and money to get the paperwork completed, the infrastructure and systems in place, and start offering programs,” Rees said.

With so much on her plate, Roy says it can be tough to balance her time. One way she incorporates fun into her day is by bringing her son, Cody, 4½, to the barn.

“He loves going down to the barn and likes the horses — and Ben, he’s so old and so gentle, Cody can lead him,” she says. “He loves them all and knows all their names and pets them.”

Roy also recently took up piano lessons as an adult, having played as a kid and in high school. She’s “loving every minute of it.”

Getting the community involved with the organization and raising awareness about draft horses is also important to Roy. One way she does this is by inviting people to visit the horses and bring any spare change with them on the first Saturday of the month. Draft Gratitude also hosts a large animal rescue training for local firefighters and first responders once a year. Coming up next month, the training will be about how to handle an accident that involves a horse trailer. Other ways she engages the community is by speaking at Kiwanis, women’s clubs and Rotary, and inviting 4H clubs to visit the facility and Keene High School students to complete community service hours.

Most of Roy and the board’s focus right now is preparing for the upcoming training. But looking forward they want to grow the $12 monthly giving program. It costs about $12 a day per horse for basic care, so people can sponsor horses with their donations. Roy would like to get that team from the current 100 sponsors to about 300.

She’d also like to work toward a more “well rounded puzzle” in terms of where the money given to Draft Gratitude comes from. Last year 62 percent came from individuals, 31 percent from fundraising and programs, three percent from grants and four percent from corporate giving.

The are making steps toward that goal as a recent recipient of a grant from the Doris Day Animal Foundation, a national nonprofit founded by the legendary performer, Doris Day. The charity funds organizations nationwide whose mission is to care for and protect animals.

Sometimes, the rescue receives unique donations — like last October when Liz Klein and Bob Pierce of LightStream Associates in Hancock made a short documentary about Draft Gratitude. It’s posted on the nonprofit organization’s website and will be a part of the Monadnock International Film Festival next month.

“It tells the story, shows new mules coming off the trailer, shows our farrier … and really tells our story in five minutes,” Roy said. “It’s amazing how the community has been very supportive of what we’re doing. It’s pretty awesome.”