Get To Know Me – Big Ben 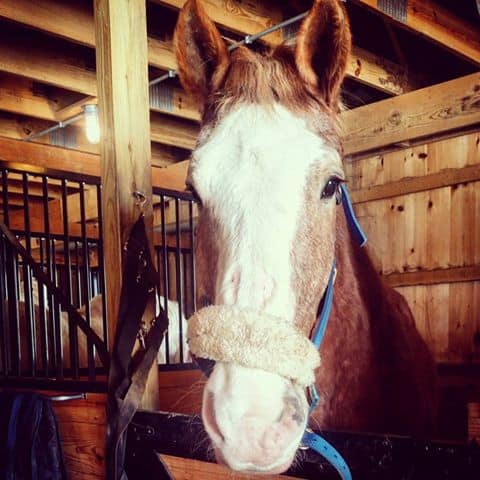 Get To Know Me – Big Ben

Big Ben joined us back in November of 2014.  He was the second draft horse that we saved. 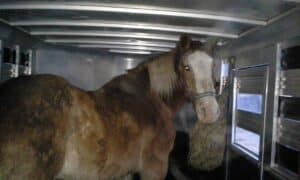 From the very first day he has been kind and gentle.

I can’t imagine how he ended up where we found him because I have no doubt that Big Ben had lived with a family for a very long time.  I believe that he was one that was treated better than so many others.  While I’m sure he worked very hard, he was cared for and treated kindly.

I can’t think of a time that Big Ben ever spooked at or was startled by literally anything.  Trucks, tractors, equipment, 4-wheelers, dogs, other horses, people, nothing.

Although Big Ben is quite an elder, easily into his 30’s, he is still quite playful.  He befriended Jetstar as soon as he arrived. Those two have a special bond for sure.  They would play and play. They would sunbathe together, eat together, drink together, and take turns watching over each other during naps. 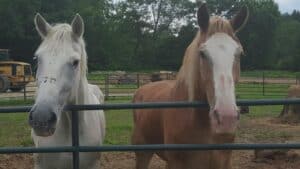 Big Ben rules the roost, or in our case, the barn.  While he is a kind, gentle, and brave horse to work around, all the other horses know that he is in charge.  He is rarely, if ever, tested.  It just seems to be known throughout the herd that he is the leader.

At one point along the way, Ben had developed a sore spot on his left hind leg.  In an attempt to keep flies away from it, we purchased a new fly sheet for him. He of course stood perfectly still when we put it on him.  No worries, no fears, no concerns.  We adjusted everything, had it fitted to him just right.  And then we put him back out in his paddock.

I returned a few hours later to find the fly sheet still attached to him, but literally shredded.  It’s hard to even put down in words exactly how demolished this fly sheet was.  Try to picture a draft horse wearing a royal length wedding dress train as he moseyed on up to the gate to be fed.  I’m not exaggerating.  I’ve never seen anything like it.  While it’s probably not THAT funny, I still laugh and laugh about it.

Big Ben is an awesome old guy.  He loves company, he loves kids, he loves Jetstar, and he loves napping.  (He doesn’t seem to love fly sheets.) 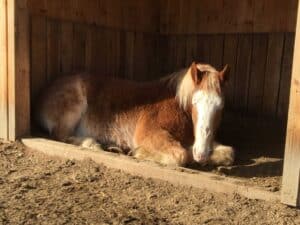 He is great for the vet, pretty reasonable for the farrier, and is as brave and steady as they come.

Another fun fact about Big Ben, is that it is his head that is drawn into our Draft Gratitude logo!

Big Ben will live out his days of retirement with Jetstar in sanctuary here at Draft Gratitude.

Draft Gratitude is an all-volunteer, nonprofit organization in Winchester, New Hampshire. To learn more about the important work we do helping senior draft horses, visit our website at:  www.DraftGratitude.com