Get To Know Me – Charlie 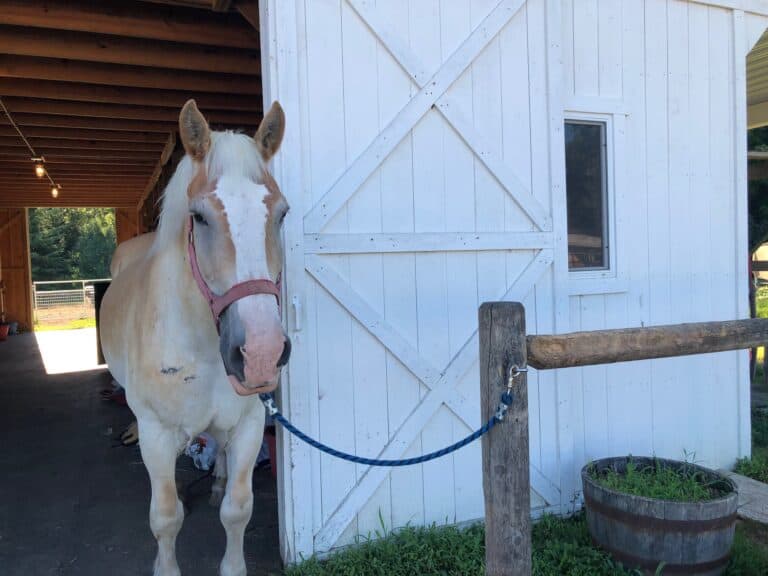 Get To Know Me – Charlie

Charlie joined us in May of 2019 from the Canandaigua auction in New York.  He was in pretty rough shape.

He was thin, had old harness sores, bite marks, overgrown hooves, and a swollen knee.  Charlie came with a little note that told us his name. 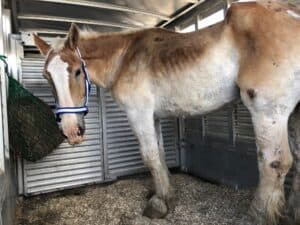 Charlie needed what almost all of them need when they get here, the works.  He had his hooves trimmed, a bath, his teeth corrected, vaccines, an appropriate feeding plan, de-worming, and lots of love.

He was a sweet boy right from the start. Very well behaved, very curious, very persistent about feeding times, quite a character really. 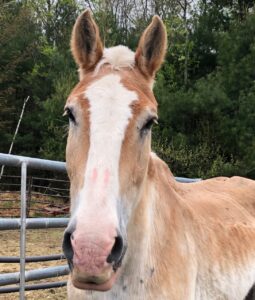 Charlie was quite thin, he just wanted to eat and eat and eat.  Once his teeth were corrected, he was able to chew and digest his feed better.  But for many months after that, Charlie would “bolt” his food.  He would try to eat his food so fast, that he would end up choking.  We made many adjustments for him to prevent the choking.

We always fed him separately so that he didn’t feel like there was any competition. He had access to hay 24/7 so we knew his belly was getting filled up.

We add water to all of our horses’ grain to aid in chewing and digestion. Since we focus on older horses, we deal with a lot of poor dentition.  For Charlie, we added even more water.  We also started using a much larger feeding tub for him so that his food was not only soupy, but was also spread out.  This seemed to help slow him down. 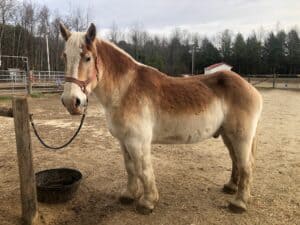 Charlie has arthritis in his front left knee, he gets around on it ok, but its hard for him to pick it up for the farrier because the range of motion is reduced.

He also has some type of neurological issue going on in his hind end. He seems to lack some control over hind leg movements.  Again, he gets around ok.  But this type of thing makes trimming his hooves difficult.  He needs sedation to get through it, but the sedation makes him more unsteady.  We try to use a combination of a very light sedation while using the stocks to support him.  So far so good!

Charlie is a comical guy.  His feeding place is at the entry of the barn at a hitching post.  So he gets a lot of attention from everyone walking in and out of the barn.  He loves it.  He will just stand there and watch whatever is going on while tossing his head just enough to make his lower lip flop. 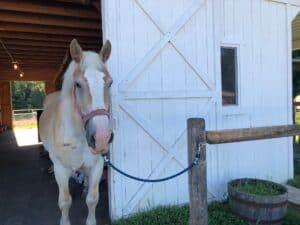 Charlie has come a long way! We are so grateful to have him here with us.  Charlie has many fans these days, thank you all for supporting his care.

ps.  Charlie also made the cover of the 2021 Draft Gratitude Calendar! 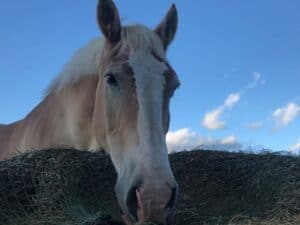 Draft Gratitude is an all-volunteer nonprofit organization in Winchester, New Hampshire.  We give senior working horses a second chance and a place to call home.  To learn more about the work we do, visit:  www.DraftGratitude.com